Bathrooms are warm and moist environments – a haven for bacteria and mould, so although you might be cleaning regularly, there are probably items in your bathroom that you should be adding to your cleaning schedule or even replacing more frequently.

But don’t be too hasty to bin things – there’s an environmental impact to replacing things needlessly and, quite often, with regular cleaning you can prolong the life of items in your bathroom and therefore reduce the need to replace them as often.

In addition to your weekly bathroom blitz, here’s how often you should be cleaning and replacing all of the other items in your bathroom.

These germy brushes get used for one of the worst cleaning tasks in the house, then they sit in a moist toilet brush holder that rarely – if ever – gets cleaned.

After every use or at least weekly, fill the toilet brush container with hot, soapy water and a few drops of bleach. Swish the brush around in the water and let it soak for 10 minutes, then empty the water down the toilet. Flush clean water over the brush, spray both the container and brush with a disinfectant spray and return it to the container.

If you have time, allow the brush to dry before placing it back in the container; do this by trapping the brush handle under the toilet seat and letting the brush drip into the toilet bowl for 10 minutes.

Some advice suggests replacing plastic toilet brushes every six months, but if you clean it weekly there should be no need to replace until the bristles become discoloured or bent out of shape, or it’s smelly, even after cleaning.

If your bath mat is machine washable, wash it once a week on as hot a wash as the care label allows, using a biological detergent.

There’s no hard and fast rule on replacing your bath mat, particularly if you wash it regularly. But if your bath mat isn’t machine washable or doesn’t wash well, like some very thick mats that are difficult to get dry, you may want to think about replacing it with one that’s easy to clean weekly.

You should be thoroughly rinsing your toothbrush in hot water after every use and as a general rule, it’ll need replacing after three months. But replace sooner if the bristles are worn out or bent out of place.

Once a week sanitise bristles by leaving toothbrush heads in mouthwash for a few minutes (but no longer than 15 minutes or you can damage the bristles.) If you don’t have mouthwash, soak toothbrush heads in a solution of two teaspoons of bicarbonate of soda and one cup of water or use denture cleaning tablets.

Kids’ bath time wouldn’t be the same without plenty of fun bath toys, but they can become a haven for mould, mildew and germs.

After every use, give them a rinse and squeeze out any water. Sterilize them every two weeks by immersing in a solution of Milton Sterilizing Fluid – follow instructions on the bottle for dilution strength. Leave for 15 minutes then rinse and try to dry as best as possible.

It’s time to bin any toys that have become impossible to get clean. If there’s water trapped inside, it could be a breeding ground four mould and germs. If you can get the water out, but it looks a funny colour or smells and you can’t get the inside clean by sterilising it, then it’s best to bin it.

To prevent the growth of mould and mildew leave the curtain open after showering – this allows it to dry which will discourage mould from growing.

Clean the shower curtain on a monthly basis, if it’s machine washable then wash using the hottest temperature the care label allows for. For curtains that aren’t machine washable or to remove mould and mildew stains, scrub with a bleach solution and rinse thoroughly after; bleach can rot the fabric. For a greener alternative, soak your shower curtain in a solution of soda crystals, following pack instructions. Dry well before hanging again.

In very humid bathrooms that are susceptible to mould and mildew you may want to consider replacing the shower curtain every six months to a year. But if you wash it regularly and keep the bathroom well ventilated it should last much longer.

After each use, try to air towels on a heated towel rail or a clothes airer so that they dry quickly. Otherwise, the combination of dead skin cells, bacteria and moisture makes for a nasty breeding ground that you won’t want to rub on your freshly showered skin.

Bath towels should be washed after every 3-4 uses to keep them hygienic. Use a biological detergent and wash at as high a temperature as the care label allows, this’ll help to kill most nasty moulds and bacteria. There’s no need to replace towels frequently as long as they are washed thoroughly and regularly. But replace it if the towel has a mould or mildew smell even after washing.

It’s all too easy to leave razor blades on until they feel blunt, which could be several weeks depending on how often you shave. In one study by Microban, between 100 and 4.9 million bacteria were found on razor blade cartridges, this can lead to rashes and even infection if you cut yourself shaving.

Clean the showerhead weekly as part of your usual bathroom cleaning routine. For those in hard water areas the shower head can get clogged with limescale, so you’ll need to descale on a monthly basis, unscrew the shower head and soak overnight in a 50/50 solution of water and white vinegar, then rinse and re-attach. Caution: never use vinegar on gold or gold plated fittings as it can damage the finish.

According to bathroom retailer Drench, you should be replacing your shower head every 6-8 months because sediment from your tap water, as well as bacteria and mould, can build up inside. But if you can give a monthly descale and deep clean it should last a little longer.

They’re great for exfoliating skin, but that means they can get clogged with dead skin cells and bacteria, so you need to clean your loofah regularly to avoid infections from smearing bacteria back into your skin every time you use it.

After every use, rinse your loofah thoroughly and allow to dry between uses. Clean your synthetic loofah weekly by soaking in a solution of one part bleach to nine parts water, letting it soak for 5-10 minutes.

For natural loofahs soak in a solution of four tablespoons of bicarbonate of soda to every litre of water. Rinse thoroughly and allow to dry. You’ll need to replace it every four to six weeks.

We’d recommend switching to a loofah made of natural fibres which are more eco-friendly, even though they still need replacing regularly, there’s less of an environmental impact than with a synthetic plastic-based loofah.

This content is created and maintained by a third party, and imported onto this page to help users provide their email addresses. You may be able to find more information about this and similar content at piano.io

In His Individual Dwelling, an Interior Stylist Requires a Light Contact

Sun Aug 15 , 2021
“I Had LIVED Right here for a yr but had hardly ever observed my condominium in the light of day until eventually the Covid-19 pandemic,” suggests Colin King, a 33-year-old Brooklyn Heights-primarily based interiors stylist. Prior to the keep-at-house orders went into result in New York in March 2020, he’d […] 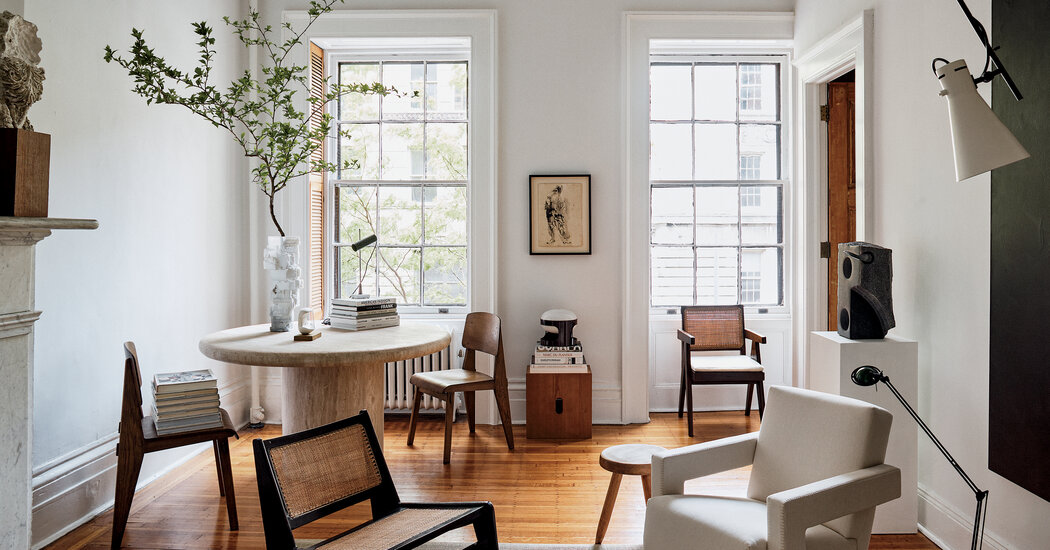