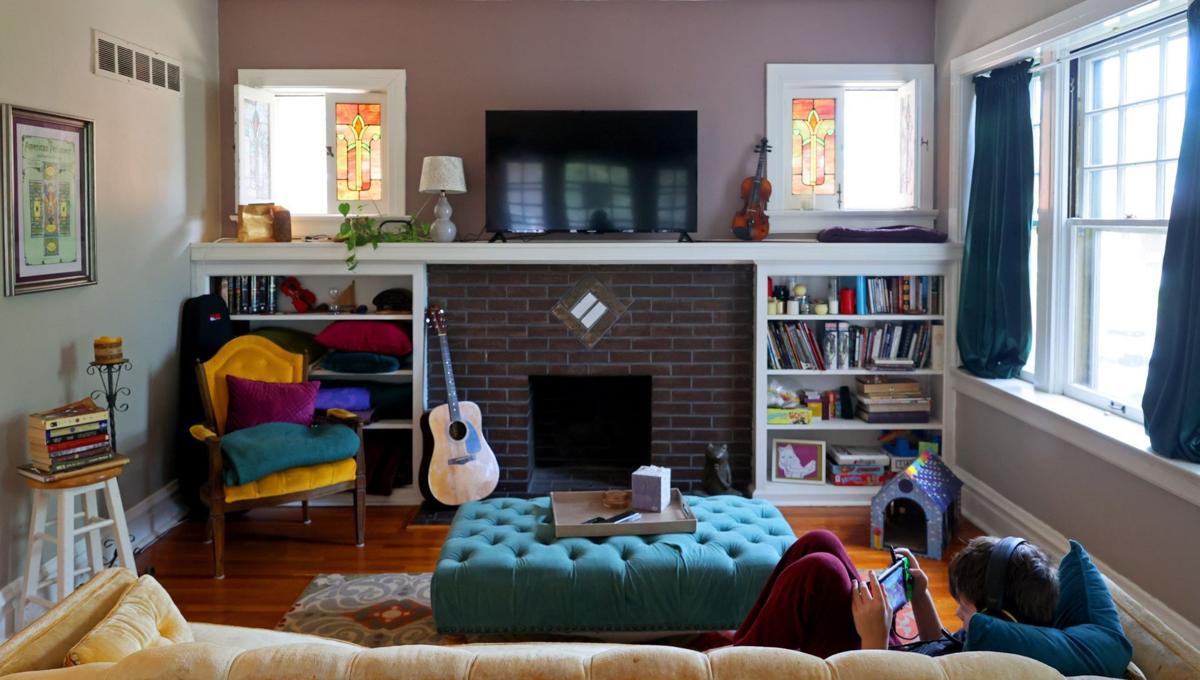 Most furniture in the home is covered in different colors of velvet fabric. The two stained glass windows are original to the home. The windows face due west, and at sunset the windows bathe the room with a prism of light. Sam, 10,  is in his favorite position on the couch in the lower right. 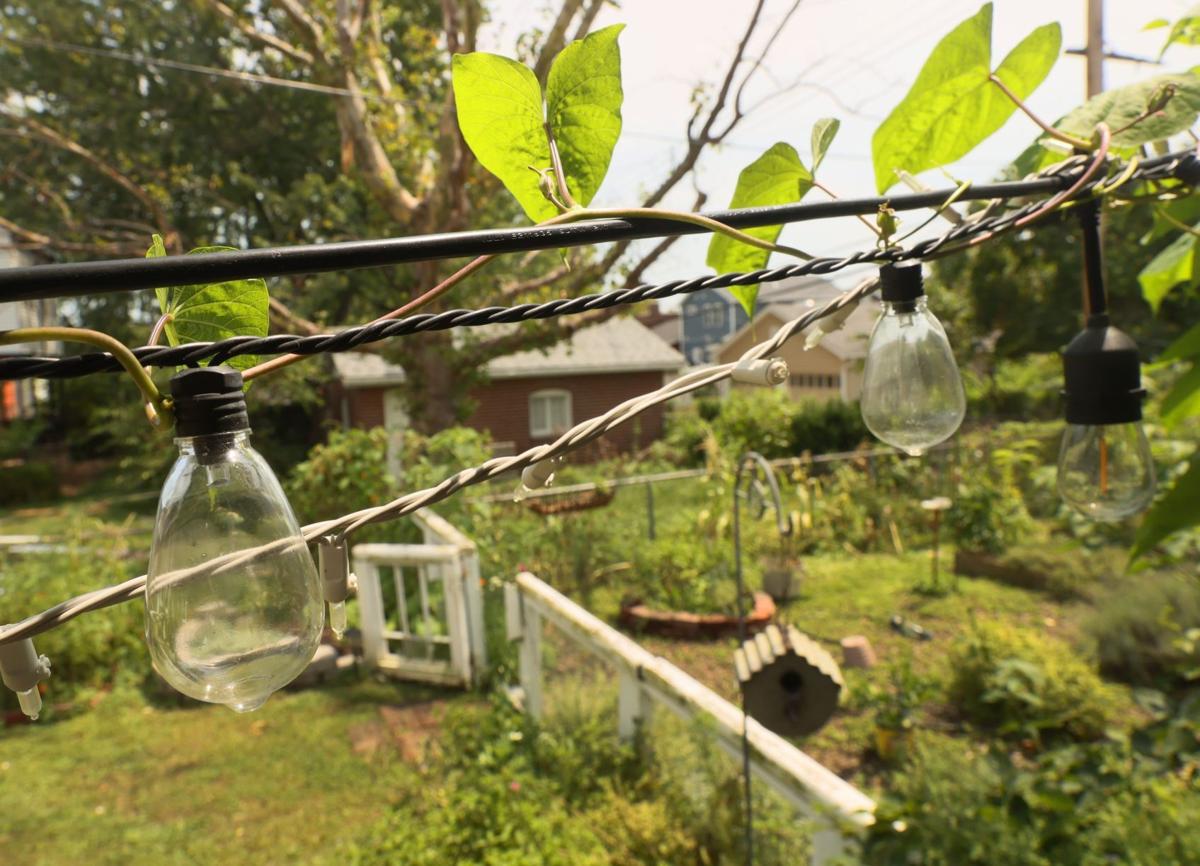 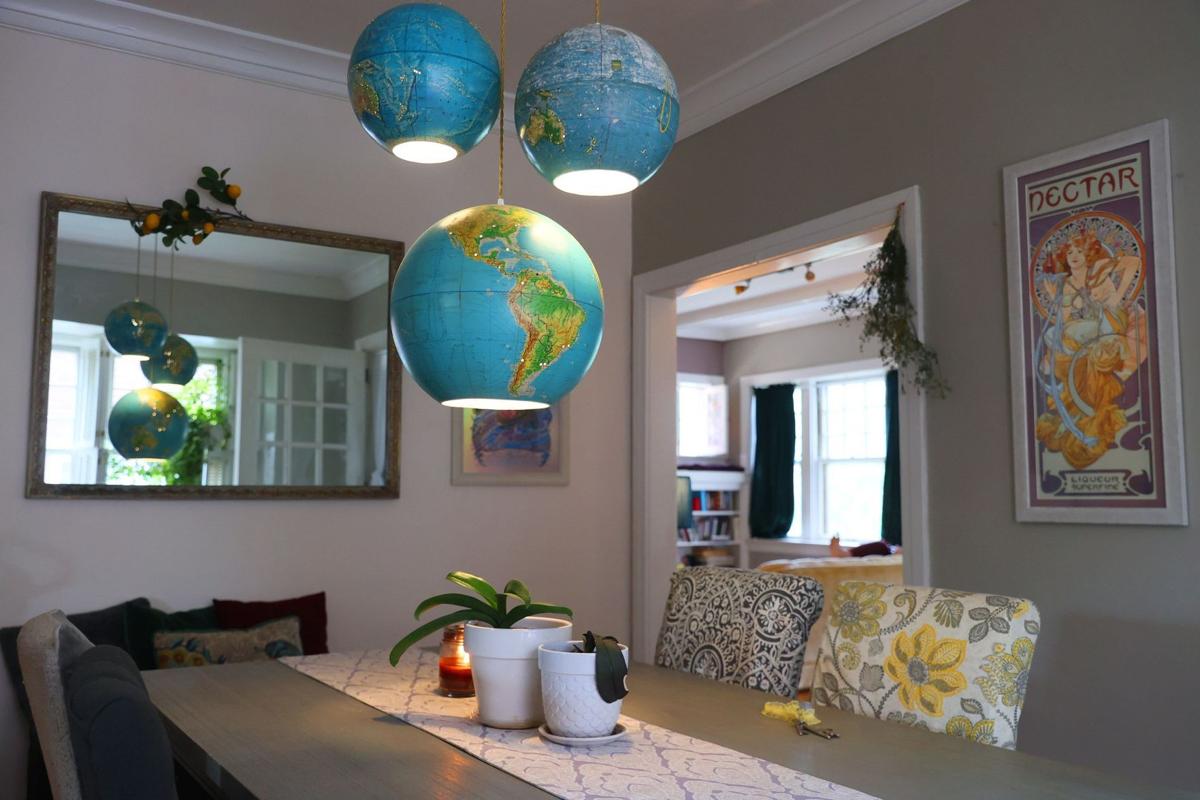 An unusual three world globe chandelier hangs over the dining room table. The chairs around the table all are covered with different fabric as Smythe does not like “matchy-matchy.” 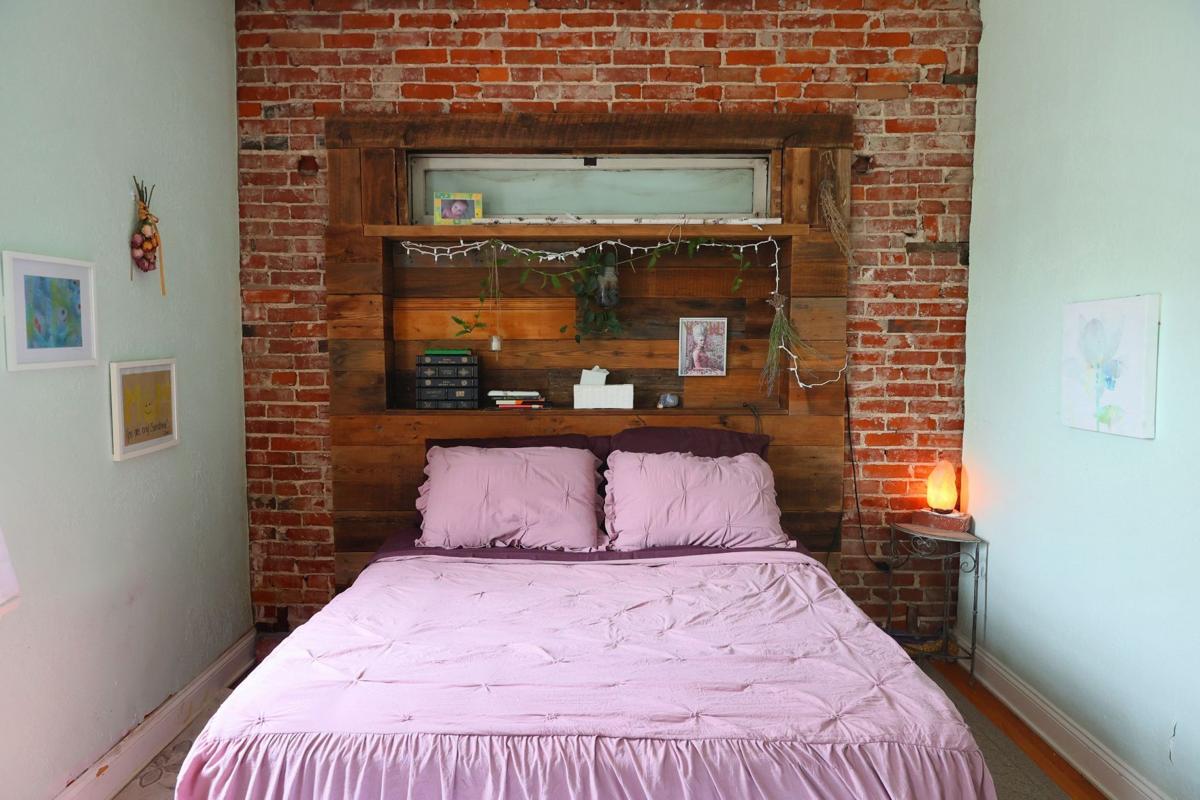 When a prior owner wanted to add a large window they discovered a brick wall and a recessed area where a window once existed. Now the indentation in the wall has been repurposed to be a headboard. 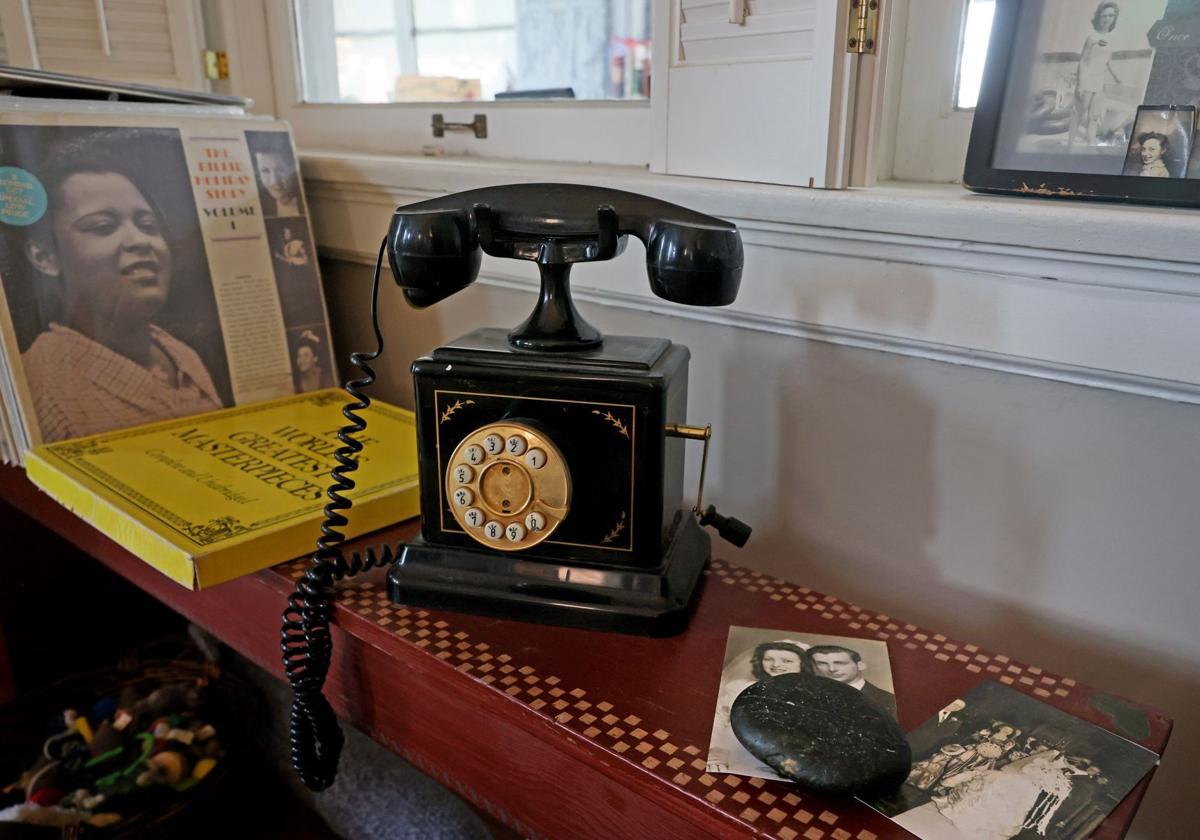 An antique replica phone is part of the décor, much of which brings to mind the 1930s and 1940s. 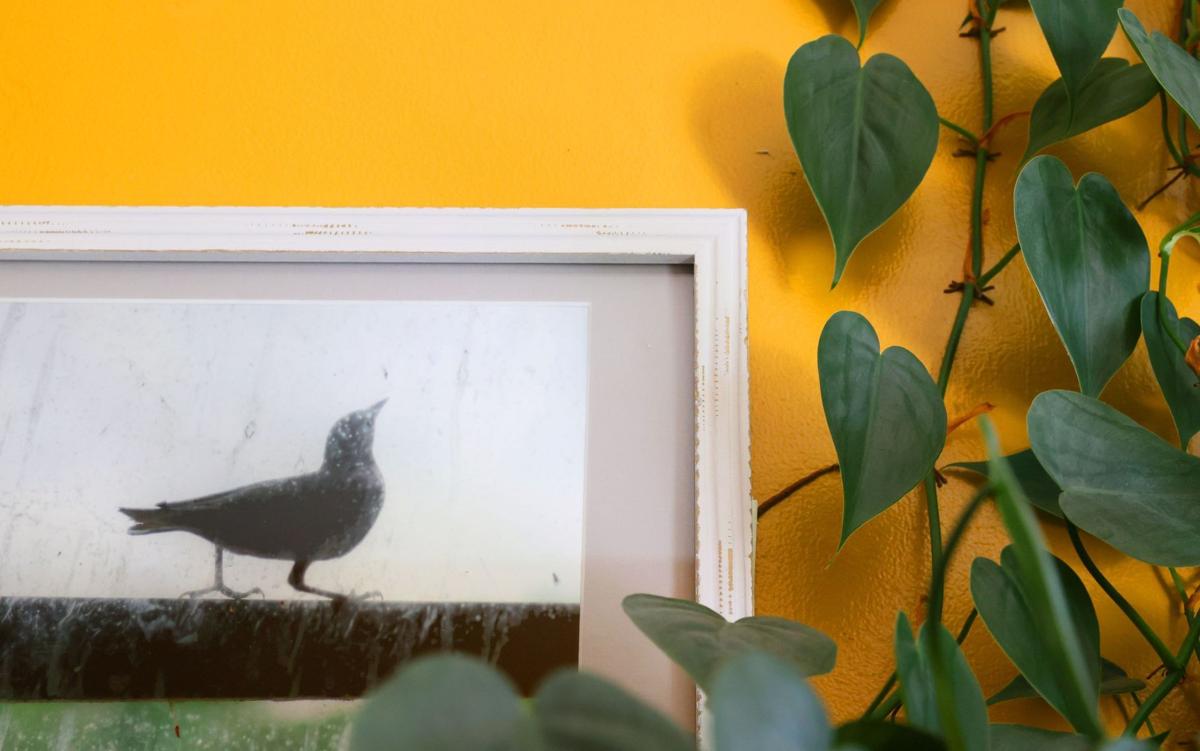 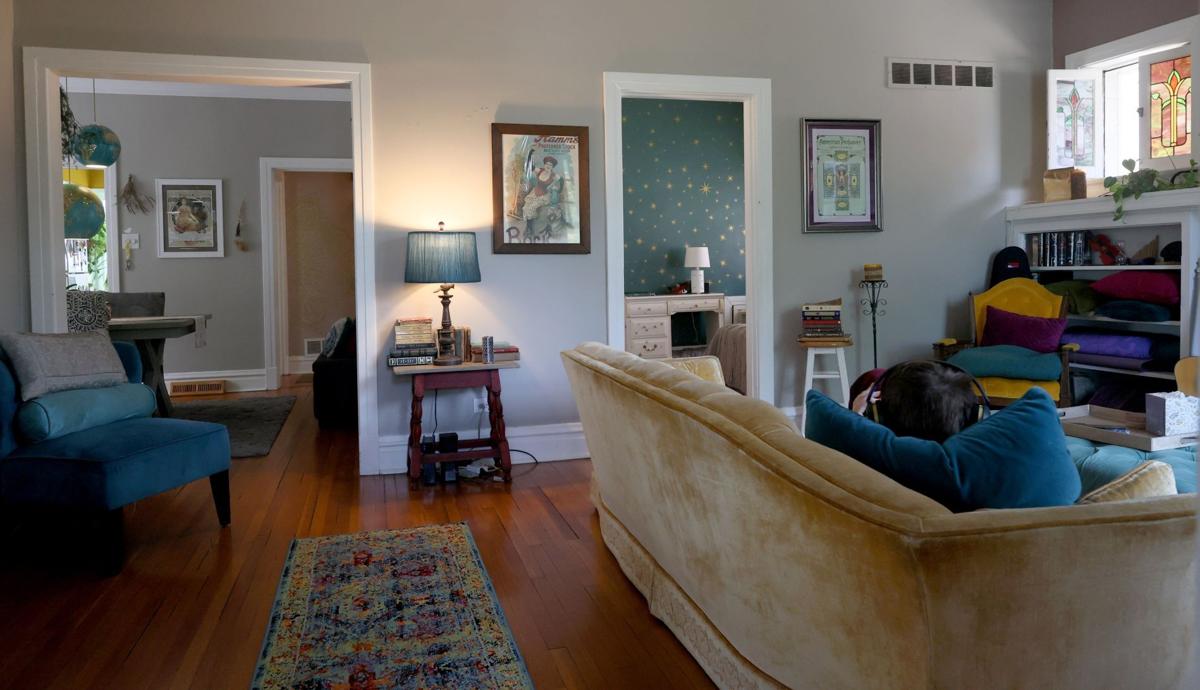 The living room opens to a bedroom and to the dining room. The two stained glass windows are original to the home. The windows face due west and at sunset the window bath the room with a prism of light. Posters on the walls are prints of images from the 1930s. 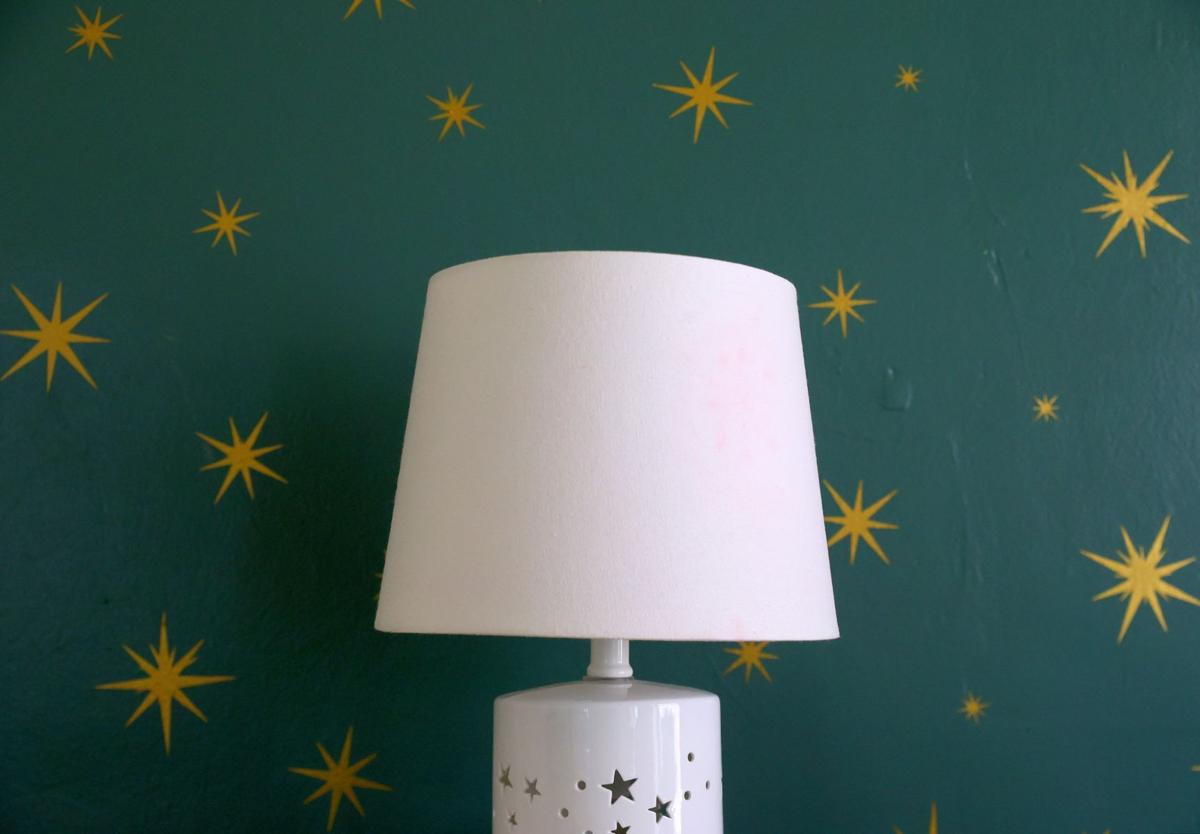 Julia Smythe prefers nothing other than bold color schemes to match in her porous, early 20th-century south St. Louis city home, photographed on Friday, Aug. 13, 2021, as a sense of the eclectic prevails.

By Jim Winnerman Special to the Post-Dispatch

After being forced to move several times when homes she had been renting were sold, Julia Smythe decided it was time to buy. Diligently perusing the internet, she discovered her 1916-era home online the day it was listed and knew immediately it was exactly what she wanted.

“I overbid, wrote the owner a letter promising to take care of the property, and told them my cats would love it,” she recalls. “I wanted the house so much and was so anxious and nervous I felt sick to my stomach. There were two other bids the first day, but by 4 p.m. I had it under contract.”

If there was ever a home buyer who has never suffered a moment from buyer’s remorse, it is Smythe. Two years later, she loves every inch of the home she was so determined to purchase. Included are details most people would not notice.

“Look at this,” she exclaims pointing to a 2-inch thick, 18-window pane door that is one of four in the home still able to be locked with the skeleton key she discovered after moving in. “Who else has stained-glass windows that open like shutters,” she says opening one of a pair of art glass windows bracketing the fireplace in the living room. She even appreciates the variety of surfaces in her sunroom. One wall is brick, and another is white limestone, while the floor is finished pine and the ceiling is stained beadboard.

“I do not like matchy-matchy,” Smythe says explaining why none of her plates, silverware or glasses is the same, and why her dining room chairs do not match.

Sun Sep 12 , 2021
It’s a stunning Sunday morning in mid-June and I am out and about in the yard of our rather little, by some expectations, estate. A speedy perusal of the scene assures me minimal has transformed since I put myself and Saturday evening to mattress on June 13. Like most mornings […]